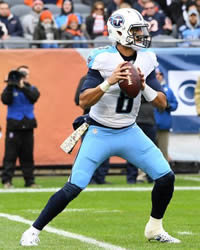 The Tennessee Titans took two big hits on Sunday: first and foremost they to a lopsided loss to the Houston Texans, who rolled on Tennessee to the tune of 57-14, but the loss of quarterback Marcus Mariota to a hamstring industry could have lasting effects for the team.

Mariota was forced to retire from the game after injuring his hamstring in a diving 2-rush for the end zone late in the second quarter. Before succumbing to his injury Mariota had gone 6-for-10 for 96 yards through the air plus 39 yards rushing, including the team’s two touchdowns in the game. He also threw two interceptions in the game, both of which were picked by Andre Hal.

In to replace Mariota was Matt Cassel, who unfortunately had to take over once the Texans had rolled up a 37-14 lead about halfway through the third quarter. Cassel didn’t score a touchdown the rest of the game, and he also gave up another two interceptions and a fumble, ultimately gaining just 21 passing yards on a 4-for-10 performance.

Though he didn’t inherit an enviable situation by any means, Cassel’s less-than-sterling showing against Houston doesn’t lend him much confidence in terms of his finding a way onto many daily fantasy player’s lineups, whether at DraftKings, FanDuel or any of the other niche operators. Similarly not good news for fans of drafting Titans players to their lineups is the ambiguity surrounding Mariota’s injury - though he was set to have MRI tests done Monday morning according to head coach Mike Mularkey, no word has come out of the Tennessee organization as to when he could be back. Mariota’s injuries, severe or not, could bode ill tiding for the Titans if he misses much any on-field time at all, especially since Mularkey’s smash-mouth style probably won’t mesh well with most any other substitute QB the Titans have available.

All that being said, Tennessee reps don’t seem too worried Mariota will miss too many games, with the best way to think about probably being “cautious optimism” on the part of the leadership. Furthermore, the 2-2 Titans have got the Dolphins (1-2, fourth in the AFC East division) next on their schedule – not an undefeatable foe by any means, even minus Mariota – in a game set for Sunday, Oct. 8. After that, at Monday Night Football on Oct. 16, the Titans are primed to go up against the Indianapolis Colts (1-3, fourth in the AFC South division), and they are in an even worse situation than the Dolphins. With the Titans Super Bowl odds at +3300 at Bovada right now Tennessee is still a long way a ways with Mariota and stand no chance without him. Tennessee sports betting enthusiasts should proceed with caution.

Still, the Titans’ wins this season, whether against the Jacksonville Jaguars on Sept. 17 or the Seattle Seahawks on Sept. 24, have not been beatdowns at 37-16 and 33-27, respectively, and those wins were against teams that are facing some serious struggles of their own this season (or in the case of the Jags, for many seasons running). And the Titans’ losses, other than the Sept. 10 defeat at the hands of the Oakland Raiders (26-16 Oakland’s way) have been close. The fact remains that the loss of Mariota beyond, conservatively, the next two games could be detrimental to the Titans’ long-term fortunes with heavy hitters like the Cincinnati Bengals and the Pittsburgh Steelers waiting in the wings, not to mention a Dec. 3 rematch with the Texans.

The online sportsbook industry hasn’t spoken one way or another as to what the lines will be offered on the Titans/Dolphins game due to limited information surrounding the aforementioned spate of injuries, particularly with regard to Mariota. SportsBettingTennessee.com will keep you posted whenever the situation changes, but for now it might be better to wait and see what happens before leaving Mariota in your lineup or even taking the Titans to cover the spread against Miami. That’s just how much Tennessee relies on its fleet-of-foot QB.